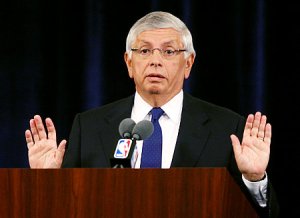 It was supposed to be the perfect weekend. The ending of the NBA lockout and the much-anticipated debut of your Alvin the Chipmunk costume at the annual Halloween party. Unfortunately one of those things won’t be happening this weekend and I’m not talking about the bobbing for apples contest.

After conversations moved in a positive direction on Thursday evening between the players and the owners, NBA commissioner David Stern put an end to any hope of an 82 game season by canceling two more weeks of games. For the second time in 13 years, the NBA will not play a full season. Match-ups between Nov 15 and Nov 30 are now history, which means Melo’s return to Denver and LeBron’s trip back to Cleveland will not be happening.  The main issue still dividing the two sides is the distribution of the revenue. Reports today stated that Billy Hunter walked out of today’s meeting with David Stern and I don’t blame him one bit.

David Stern is trying to appear that he is the one with all control but that is hardly the case. Last time I checked, the players are the ones who are generating millions of dollars for fat cats like Stern, New York Knicks owners James Dolan and Los Angeles Lakers head man Jerry Buss. There is a reason why the players controlled a majority (57%) of the revenue in the last collective bargaining agreement. It is a shame that players are going to miss pay checks but they must stand strong; 52.5% of the cut is simply too low. I know this is a classic case of the rich getting richer but you have to consider that many of the league’s participants grew up in extreme poverty and truly value every dollar.

The Commissioner’s face may be appearing on dart boards across the nation, but this lockout has proved just why David Stern has been the NBA’s commissioner since 1984. The man knows how to get what he wants and I am convinced that Stern will not back down until a deal completely favors him and the rest of the owners. It is clear that the owners have no problem sitting out the season, especially after 22 out of 30 team’s lost money last year. In fact for some teams like the Minnesota Timberwolves, playing a season would actually cause more financial debt. Let’s face it, Minnesota already has enough issues with David Kahn as GM, they don’t need to make matters worse by going farther into the red.

It is unclear where the two sides will go from here, but one thing that both the players and owners can agree on is that they are getting tired of seeing ESPN’s Chris Broussard everyday, or maybe that’s just me. Billy Hunter and David Stern need to strike a deal soon or else sports fans are going to begin flocking to the WNBA. Just kidding. In all seriousness the lockout needs to end or else the winter is going to feature a lot more racquet ball than usual. The NBA won’t be 82 games this season, but when it does return it is going to be one of the most interesting stints in the league’s history.